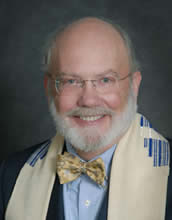 Rabbi-Cantor John M. Kaplan serves Congregation B’nai Israel in Jackson, Tennessee. This wonderful congregation is committed to keeping Judaism alive for the western segment of the state. Rabbi-Cantor Kaplan is honored to be part of bringing that dream into reality.

In addition, he is the Cantor Emeritus for Temple Israel where he served as a member of the clergy team from 1981-2014. In addition to officiating at life cycle events and other ministerial responsibilities within the congregation, Rabbi-Cantor Kaplan was involved in the adult education, Bar/Bat Mitzvah programs, and as clergy advisor to the Committee on Congregational Caring (called God’s Unfinished Business). In addition, Rabbi-Cantor Kaplan was responsible for the musical life of the congregation, which included directing the Temple Israel Choir, the Temple Israel Youth Choir, and the Jewish “Dixieland-style” band called the Klezmaniacs.

Rabbi-Cantor John Kaplan was born in the great state of Texas. He received his Bachelor of Arts from the University of North Texas where he studied music and philosophy. Rabbi-Cantor Kaplan also holds a degree of Master of Arts in Religion from the Memphis Theological Seminary. He is currently studying voice with Dr. Jemmi Lou Rye. He has studied voice with Dr. Randall Rushing, Director of the Rudi E. Scheidt School of Music at the University of Memphis, and the late Dr. Richard “Dick” Paige.

Rabbi-Cantor Kaplan received his cantorial training under the world-renowned European Cantor Joseph Cycowski in Palm Springs, CA. He completed his training under the late Cantor William Sharlin, member of the faculty of the Hebrew Union College-Jewish Institute of Religion in Los Angeles, CA. In 1989, he received Cantorial Certification and Investiture from the Board of Cantorial Certification of the Hebrew Union College – Jewish Institute of Religion, Debbie Friedman School of Sacred Music in New York. In June, 2015, Rabbi-Cantor Kaplan received Rabbinic Ordination (S’micha) from the Rabbinical Academy of America.

Rabbi-Cantor Kaplan was one of the five founding directors of the MIFA Barrier Breakers Choral Group. This choir, composed of adult volunteers representing over 25 congregations from the Greater Memphis area, crossed the barriers of race and faith in order to bring the blessings of unity, tolerance and understanding to our community. Rabbi-Cantor Kaplan is also the founding director of Voices for Social Justice, a folk singing group made up of 5 musicians from Temple Israel who donate their talents in concert to raise funds for non-profit endeavors.

Rabbi-Cantor Kaplan has served multiple times on the Executive Board of the American Conference of Cantors – including holding positions of Secretary and Vice President along with Chair for the Committee on Ethics & Appeals.

In areas of community involvement, Rabbi-Cantor Kaplan has served on the Board of the Epilepsy Foundation of Memphis, the Arthritis Foundation of Memphis; the Eldercare & Caregivers Advisory Board, the Advisory Board for Emergency Services of MIFA, Board President for the Memphis Area Regional Aids Interfaith Network (RAIN), a member of the Spiritual Advisory Board of Trinity Hospice, and received the Community Service Award in Interreligious Goodwill from the National Conference for Community Justice.

Some of his special interests include reading, gardening, camping, cooking (especially Texas style Bar-B-Que), volunteering for community service, and music.

Rabbi-Cantor Kaplan is married to Linda C. Kaplan and they have six wonderful and good-looking adult children and spouses, 4 beautiful granddaughters and 2 wonderful grandsons — “all above average!”